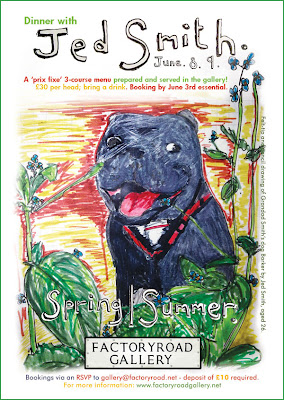 A 'Dinner with Jed Smith' is a new idea of ours to use our gallery space as a 'pop-up restaurant' on the 8th and 9th of June!

Spaces are limited and the first night is over half-booked, please book and pay a deposit soon.

Jed is offering a 'prix fixe' 3 course menu which will be prepared and served in the gallery.
It will cost £30 per head, feel free to bring your own alcohol for after your meal. There will be appropriate drinks served with the meal too.

Please book via an RSVP to brook@factoryroadgallery.net

If you have any questions, please ask!

Below are the reasons that we asked Jed to create a menu for the gallery:

We first met Jed in a record store in 2006 (he was very enthusiastic about new music and still is). When Sarah had a show on in London later that year and we needed some food doing for the opening reception. A friend pulled a team together, who unbeknown to us included that record store boy...

Jed's enthusiasm for food and music had such a positive impact on us that we knew he'd be our man for food at the next show, New York 2007. Full of enthusiasm, maturity, energy and skill, he hid any nerves with aplomb, creating beautiful platters of colour and joy from local sources on an 'inventive' budget. The Manhattanites devoured them.

Jed later returned to Leicester with grand ambitions, writing directly to Pierre Gagnaire (holder of 3 Michelin stars in Paris and many others around the world) with a little Inkymole magic on the envelope. He was put forward for a job at Sketch in London and remained there, working his way up through the ranks before leaving in 2010.

He hailed a unicorn back to New York to focus on eating his way through the city, whilst also searching for the perfect place to work. A chance meeting in a speakeasy with David Chang gave Jed the opportunity to ask him for a job. There and then, he was offered a chance to flex his skills. Within days, those skills had got him the job at Momofuku.

In 2012 Jed got back on his curly-horn'd steed to head north to Montreal to work with a friend at the Sugar Shack for an intense 3 months, under the watchful eye of Martin Picard (Au Pied de Cochon). He participated in the production of the area's renowned and precious maple syrup and cooked an obscene amount of animals, vegetables, grains and minerals.

Now he's back in the UK, walking his dog (Barker - star of the flyerl) amongst borage flowers and along the prom at Felixstowe, watering geraniums, feeding chickens and creating heron traps with his grandad, while he concocts his menu for Factoryroad Gallery's pop-up restaurant.

After this event and a family wedding he returns to Canada, but Toronto this time for the opening of David Chang's new restaurant. We hope he'll return, but it's a big world and Jed wants not just a big bite, but a little taste of just about as many of its delights as he can possibly manage.

As consultant and go-to for anything edible at all our weird and wonderful events for the past five years, we continue to engage with Jed's skills and infectious enthusiasm, and hope that by doing so has played a part in his continuing evolution as a culinary artist. We greatly anticipate his next move.
Posted by Sarah J Coleman at 15:46