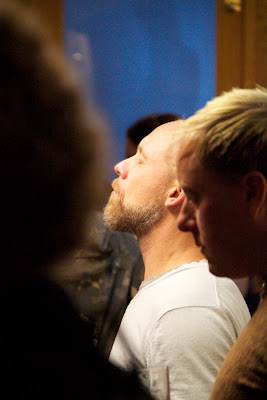 Writing the follow-up to the last show 'Buddy Wakefield - Gentleman Practice' has been a long-time coming, for various reasons like touring, going on holiday, catching up with the day-to-day stuff since returning from holiday and just being petrified of trying to encapsulate humbly a life confirming event - it's so large, that the write-up for Buddy and the artwork will be in separate blogs.

3-4 months before August 31st, the date Buddy was due to perform at Factoryroad Gallery, I'd asked him if he'd be up for me asking a few artists to interpret his words and create work based around it. To my immense pleasure, he agreed. I told him that I didn't want to discuss it with him any further and asked if that was OK, so that essentially it'd be a surprise for him and we could do what we want without checking in with him.
August 30th, Buddy arrived at Factoryroad Gallery having completed around two-thirds of his European tour. We were both tired (maybe not as tired as Sarah) from being constantly on the road and arriving home to a calm, quiet, warm non-pressured environment with comfy beds was much-needed.
I'd made a point on the tour (I drove him around the UK leg of his tour) to not mention anything to do with the show and to maintain radio silence regarding it, so when Buddy arrived, he thought at 1.30am that the artwork he initially saw on the walls were just pieces that we'd collected. But when he came down for tea (he hates tea) he noticed that a couple of the pieces referenced his work. He then asked, "so which pieces are based on my work?" I simply said "all of them". If he had a glass jaw, it would've shattered as it hit the floor - he'd clearly been practicing being quiet very well.
We then proceeded to slowly walk around the gallery examining each piece, Buddy applying ALL of the words that he has written to the image/sculpture/creation in front of him to work out which ones applied (at this point, the information boards had not been mounted); where he got confused, I filled in the gaps.
I could see small explosions kicking off in his being. He was more overwhelmed than I had accounted for, which is stupid as I'd been completely overwhelmed by all the contributors to the show. But, he held it down appreciating the ingenuity and beauty of each person's (sometimes very) personal interpretation of response to his work, until he saw Nigel Axon's. Nigel is the architect that designed our extension/gallery/studio. He's a problem-solver, and has a vision that goes beyond bricks and mortar.
Nigel had created a piece that included various elements of Buddy's poem 'My town' in a 3D rendering designed in Google's Sketch-up, then printed it onto 4 A1 boards. Buddy immediately saw this and was excited to see the different elements realised, but then... he saw the bridge that had been built in his hometown in his own lifetime, this pushed him to exclaim "this is my town...that's...Baytown, that's the bridge..." And the pressure valve was released.

He went to bed, tired, overwhelmed, calm, but buzzing.

The next day Buddy needed to spend some time alone while we and the rest of the crew finished off the details for the show, and from that point on until later that night, Buddy and I didn't really cross paths, though we were surrounded by friends, colleagues and keen warm people. The only time during that day that I really heard him speak was when he performed, it was then that it became clear that maybe I should've spoken to him a bit more about what he was walking in to when he arrived at Factory Road. His show-opening gambits were normally to greet and warm the crowd into listening to poetry, thanking the promoter and then getting into a performance that he would modify for each different type of crowd. This time though, he got stuck on 'thanks', so overwhelmed was he at the sheer amount of work, respect and truth put into the artwork. For a man who has performed in front of crowds more than twenty times the size of what we can squeeze into our small space, I was overwhelmed by his being overwhelmed, but once he got into 'We Were Emergencies', he was back in his comfort zone, and gently escorted a crowd largely unexposed to live poetry through hundreds of words, human experiences, breaths and postulation.
The feedback we received that night and the numerous messages we received illustrated that, that night, 'we were love'.

More pictures and less words to be seen here.
Posted by Sarah J Coleman at 11:16